"I believe there are angels among us, sent down to us, from somewhere up above. They come to you and me, in our darkest hours, to show us how to live, to teach us how to give, to guide us with the light of love."
-Alabama song 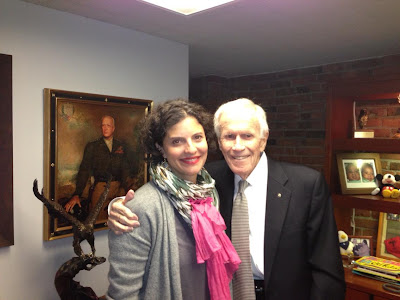 This was the last time I visited Phil at his office at the Seattle Mercedes dealership, Oct. 2012.


Phil Smart, Sr. was and is an angel among us.


It’s really hard to know where to begin to write about Phil Smart, Sr.  There are so many things I could say about what he meant to me and SO many others in the community. He was a friend, mentor, cheerleader, family man and community leader who I admired/admire so much. A lot has been said and written about Phil since he passed away on February 8 of this year. I attended his memorial service last month at McCaw Hall which was a wonderful tribute to an amazing man.
This morning I was honored to represent the Phil Smart Sr. Guild of Seattle Children’s Hospital (which I helped start in 1995) at a ceremony dedicating Phil Smart, Sr. Way which leads to the newest building on the Seattle Children’s campus, appropriately named “Building Hope.” At the memorial service and the dedication ceremony this morning friends told stories, laughed, cried and remembered Phil. I haven’t stopped thinking about him all day. I could write a book about what I learned from Phil… maybe I will one day. But today I just want to share a few pictures and Phil-isms that are on my mind. 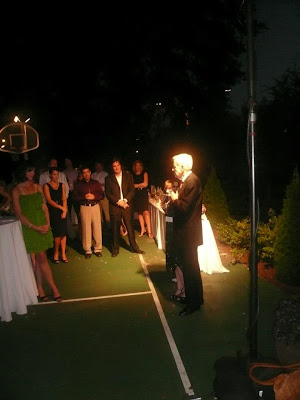 Phil speaking at a fundraiser for "his" guild - he's glowing, just like an angel!
Phil was a volunteer at Seattle Children’s Hospital for 46 years, from 1961 to 2007, spending most Wednesday evenings on the Rehabilitation Unit and serving as Children's Santa Claus for many years-known fondly to patients as 'The Real Santa Claus.' He was also an active member of “his” guild. He attended our meetings (along with 10-20 young women) and provided inspiration about the “Miracle House” and his “teachers” (the patients) of Seattle Children’s Hospital.


DO NOT FEAR… Phil was a man of deep faith. I carry his wisdom and faith with me every day. After September 11, 2001, Phil called me at my office to check in as he did every couple of months. I expressed to him my fears about the recent terrorist attacks and underlying sense of unrest in the world. In a calm and comforting voice, he shared the following Bible verse with me.

I wrote it on a sticky note and kept it in my daily planner for years. A few months ago, I rewrote the verse on a new orange sticky note and put it in my planner after a good friend was diagnosed with cancer. I also shared it with my friend’s wife. It has become our mantra. Thank you Phil. We do believe!


Phil called me just a few hours before he passed away. I didn’t have “time” to call him back before he passed – which I beat myself up a lot for. But I did save his voicemail, along with another one from a few months earlier. He sounded lucid and strong even though just hours later his (BIG) heart stopped beating. Here’s his “very Phil” message:


“Good Afternoon Amy Anderson. This is Santa Claus. It’s Friday afternoon, 3:30. I’m calling from home. I want to talk to you about your behavior. When you have a minute… I hope all is well. Thanks. Bye bye.”


I am so honored that Phil (I mean Santa!) called me that afternoon. I’m just sad I didn’t get to wish him well and say “Bye bye. See you later!”

WHAT WOULD PHIL DO?


Phil was truly one of the kindest people I have ever met. He did not judge anyone and he accepted everyone, from every walk of life. Since his passing, many times I have found myself thinking “What Would Phil Do?” Truly, he always seemed to do and say the right thing. This is not to say he was a softy, by any means. He was a military colonel and a very successful businessman after all, but he always conducted himself with the utmost grace and showed respect for everyone he met.


Phil’s beautiful and kind wife, Helen—who he affectionately called “Precious” and “Sweetie”—was a devoted life partner to this amazing man. When Phil talked about Helen, he just glowed. I always secretly wondered if they ever fought or disagreed. I only ever saw love and deep mutual admiration between them. 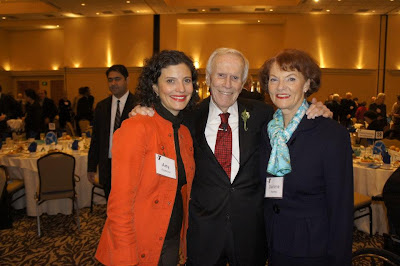 Celebrating Phil's community service at the YMCA award luncheon with my mom, Nov. 2011.


Another thing that touched me was Phil always asked about Geoff, Sofia and my mom, every time we talked. And he truly cared. That kind of thoughtfulness seems rare these days.  When I would call my mom to give her the Phil update after talking to him or seeing him, she always said “What a guy!” I agree - what a guy he was!


1.    He was always immaculately dressed in a gorgeous suit and tie! (With his Rotary pin on his lapel!)


2.    He was always on time – or early.
3.  He was very patriotic and was proud of his country. The red and blue color palette is in his honor.


These are just a few of the many things I learned from Phil. He helped me to be a better person, and for that I am grateful. I know his time was in God’s hands, but I miss him a lot.


See you later my friend! I love you! 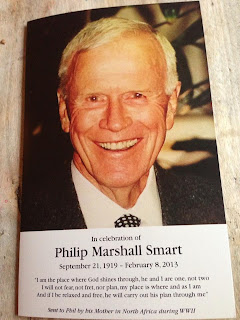 “I am the place where God shines through, he and I are one, not two. I will not fear, nor fret, nor plan, my place is where and as I am. And if I be relaxed and free, he will carry out his plan for me.”


(This appeared on the cover of the program from Phil’s memorial service. It was sent to Phil by his mother when he was serving in North Africa during WWII.)
Posted by Amy Hermes Anderson (AHA) at 4:57 PM