Happy New Year friends! This is my first post of 2012. Yikes! I want to get into a more regular schedule but life is busy, so my goal is to post as much as I can in the New Year without being hard on myself for not fitting it in. I get so much joy out of writing this blog and sharing my thoughts, ideas, inspirations and adventures with you in this way. 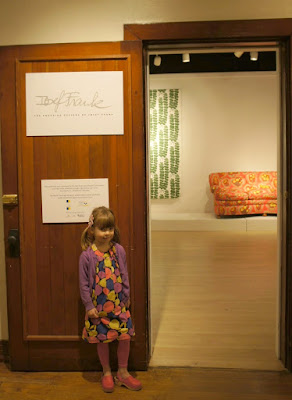 During winter break, Sofia and I went on an adventure to Ballard – a neighborhood in Seattle where many Scandinavian immigrants settled years ago. Now Ballard is a hip, gentrified neighborhood with few signs of the Swedes, Norwegians, Danes, Finns and Icelanders who settled there. Except for the Nordic Heritage Museum, a gem of a place that houses “an internationally recognized museum and cultural center where people of all backgrounds are welcomed to be inspired by the values, traditions, art, and spirit of the Nordic peoples” (according to their website).  Inspired we were!


Our adventure took us to the Nordic Heritage Museum because I wanted to see the Josef Frank exhibit. I had never heard of Frank before but when I saw an ad for the exhibit featuring his colorful textile designs, I knew I would love it and that Sofia would too. And we did!

Austrian-born designer and architect Frank (1885–1967) is considered a leading pioneer of Swedish Modern design. Frank married a Swede and moved to Stockholm in 1933. Unlike the severe approach to modernism taken by many of his contemporaries, Frank emphasized comfort and informality, producing whimsical designs inspired by nature. Frank’s lavish use of bright, bold colors and floral patterns quickly became popular with a host of Swedish designers and clientele.

Frank believed that complex, colorful patterns produced a calming effect in a room as long as the walls remained white. According to Frank, "The modern living room has white walls; that is the only possibility to preserve the freedom of introducing into a room whatever one wants without being hindered by colored decorations." Such walls, Frank believed, provided the proper backdrop for mixing an assortment of textile patterns. One textile might serve as curtains, another as a bedspread, and a third as furniture upholstery.
Sofia's favorite was the Hawaii pattern. (below) According to Svenskt Tenn, Frank found inspiration for the Hawaii pattern at the Metropolitan Museum of Art. There he found a remarkable collection of “Trees of Life” from the north side of the Indian peninsula. This pattern, with its intertwined stems, bears similarities to these trees.

My favorite was this Cattleya pattern. Cattleya is an orchid that grows in the rainforests of South America. I love the vivid colors and the happy, joyful flower pattern. I especially loved it on this couch - see below. Doesn't it just look so inviting and comfy?

I thought this green chair looked fun and inviting too. 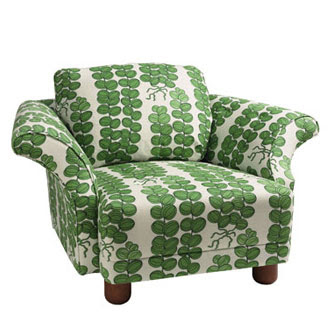 Apartment Therapy went a little crazy with Josef Frank wallpaper and pillows... pretty fun if you ask me.

If you're up for a little Scandinavian culture and a colorful adventure, I hope you will visit The Enduring Designs of Josef Frank exhibit, which runs through February 19 at the Nordic Heritage Museum.