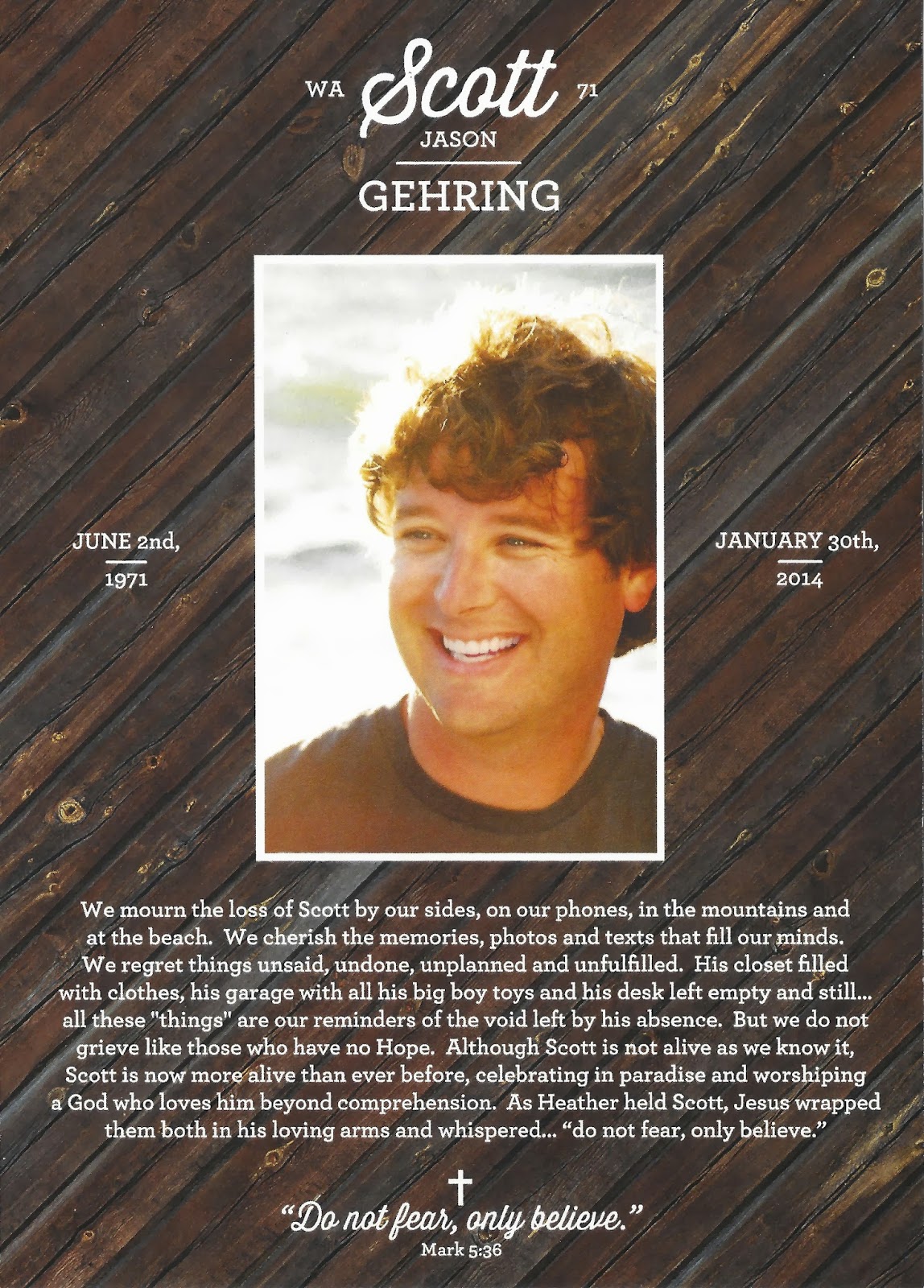 My life forever changed on January 30, 2014 when my oldest friend of 40 years died of cancer. Being with Scott before and after he died is one of the most intensely human experiences I've ever had, besides giving birth to my daughter. It was an honor to be with him in his home along with his family to say "goodbye" and "see you later."
I honestly didn't realize how unique and special our lifelong friendship was until after Scott passed away. Remembering our experiences from childhood until now caused my own life to flash before my eyes as I wrote his obituary, along with his other best friend Thomas; went through hundreds of pictures; and prepared my remarks for his service.
Below is Scott's full obituary that we wrote. It was edited for the newspapers but I wanted to post the full version here for all to see what a truly amazing guy Scott was.
........................................................................
A LIFE WELL LIVED
Scott Jason Gehring, forever exhibiting grace under pressure and living fearlessly, died in the arms of his loving wife, Heather, at their home in White Salmon, Washington, on January 30, 2014 after a courageous battle with cancer. He was 42 years old. Scott was born in Olympia, Washington, to Walt and Marsha Gehring on June 2, 1971.
Saving enough money from his paper route, he took up the sport of windsurfing at an early age and began his first pilgrimage to the Columbia River Gorge when he was 15. From then on his home will always be remembered as the Gorge. Forever “on the search,” chasing wind, waves and snow, and more recently his children, he never surrendered to fear and charged powerfully and gracefully in all that he did.
He continued that fearless approach living life to its fullest after his cancer diagnosis. In disbelief, his doctors would watch him leave on his own from chemo treatment and head straight to the river to catch the afternoon wind, or administer his chemo to himself while up on the mountain skiing with his children. Solid, loving, straightforward, and honest, Scott charged through life, always understated, and unwavering through the end.
Attending Capital High School in Olympia, he later graduated from Western Washington University in 1993 with a Bachelor of Arts in Economics, and more importantly forged lifelong friends who revered him. In 1995, Scott made good on his dreams and moved full-time to the Gorge, one of the most beautiful and majestic places on earth where he could combine his career aspirations with his idyllic playground for windsurfing, skiing, snowboarding, dirt biking and trips to the coast surfing. He met the love of his life, Heather Ferris, at a Halloween Party in 1998 and they were married in 2002. Scott is the father of two wonderful children, Chance (7) and Zane (3). One of Scott’s greatest joys was taking his boys fishing, even during the last year as he battled cancer. Scott's courageous spirit and sense of adventure will live on through his amazing boys.
n Scott’s 14 years working at Dakine he was passionate and highly dedicated to creating the best products possible. Scott was the ultimate “Dakine guy” and his insight into the sports and culture helped make him an essential part of the team.
Scott’s loyalty, calm confidence, quick wit, big smile and twinkling blue eyes will be deeply missed by his wide circle of friends in the Gorge and around the world. In his quiet way, Scott challenged everyone who knew him to be their best.
In addition to his mother, Marsha Gehring, his wife and children, Scott is survived by many cherished family members, including aunts, uncles, cousins, in-laws Elden and Margie Ferris, brother- and sister-in-law Darin and Heidi Parr, and nephews, Davis and Evan Parr, who have been a very special part of his life.
A celebration of Scott’s life will be held on Saturday, February 8, 2014, at the Hood River Alliance Church (2650 Montello). Gathering and greeting from 2-3 p.m.; service from 3-4:30 p.m. A reception will follow at The Bingen School Inn.
Scott's ashes will be scattered at a later date in three places he loved to play: Pacific City in Oregon, and Doug’s Beach and Crystal Mountain in Washington.
In lieu of flowers, donations may be made to the Scott Gehring Memorial Fund at Wells Fargo for the children’s education. 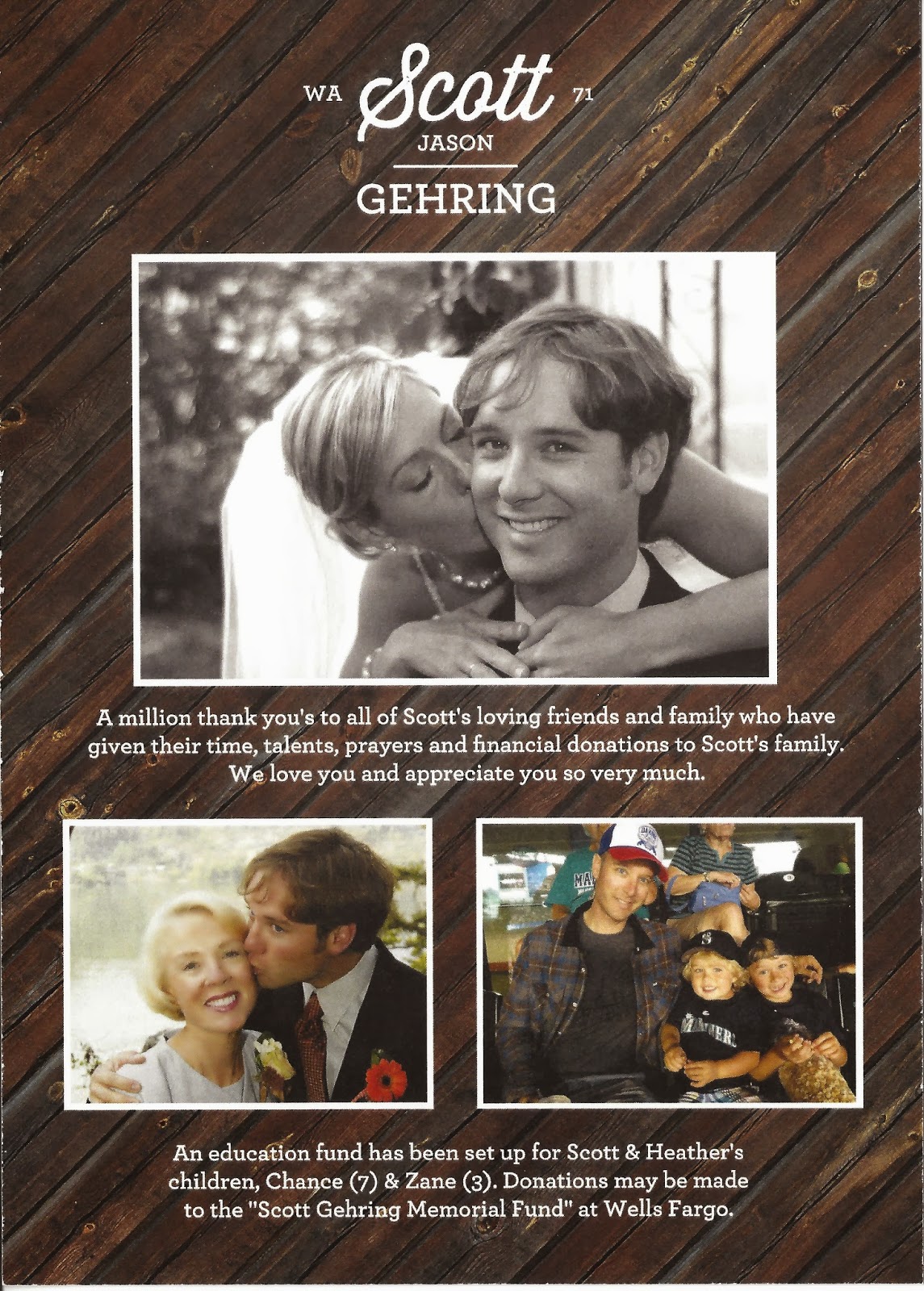