Trip of a Lifetime

We just returned from a two-week Adventure (yes, with a capital “A”) in Jordan and Israel/Palestine. It’s an unusual spring break destination but I am so glad my husband, Geoff, insisted we go there instead of the restful, beach vacation I was lobbying for. It was a truly AMAZING, fascinating, beautiful, exhausting trip of a lifetime! 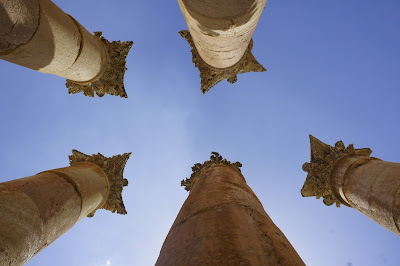 It’s impossible to sum up our trip in words or even sentences so I am planning to write several blog posts to capture the amazing sites we saw and my favorite experiences and observations.  From archeology sites to holy sites to culinary delights, fashion and of course, color!

I didn’t have time to do the travel journal I was planning because each day was so full and we were exhausted at the end of each day. So my posts will not only be for friends, family and followers who have expressed interest in our trip but also will help me document this truly enriching, life-changing experience. And we have 5,000-plus photos between the eight adults in our group so editing them down to the highlights will take some time.

Before we went when I would tell people where we were going they would usually ask two questions: "Why?" and "Is it safe?" So I will start off by answering those questions so we can move onto the good stuff! We went to visit Geoff’s brother, Bjorn, who is living in Amman, Jordan, with his wife and four-year-old son, for six months on a research fellowship. Bjorn is a classical archaeology professor who has lived, studied and written extensively on the region (think Indiana Jones!). We traveled with Geoff’s parents and his brother’s in-laws. There were 10 of us, including two four-year-olds.

On the topic of safety, overall I felt very safe In Jordan. Ironically, I didn’t feel as safe in Israel even though there were soldiers everywhere to keep us “safe.” The presence of many armed soldiers was a bit unnerving especially at the holy sites. It felt odd to have young men holding large rifles next to the site where Jesus was crucified, for example.  I saw more guns during our three days in Israel than I have seen in my whole life combined. It is a complicated country, for sure. The border crossings between Jordan and Israel were long and tense but we didn’t have any issues, thankfully.

We spent most of our time in Jordan so to provide some context for my posts, I wanted to share a quick overview of the country, including a few basic facts that I didn’t know until we started planning our trip. 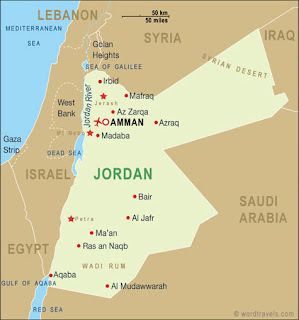 Location: Jordan is part of a region considered to be "the cradle of civilization." It borders Saudi Arabia to the east and southeast, Iraq to the northeast, Syria to the north, and the West Bank and Israel to the west, sharing control of the Dead Sea with the latter. Over half of Jordan is covered by the Arabian Desert.

Religion: Islam is the official religion. Approximately 92% of the population is Muslim and 6% Christian.

Government: Jordan is a constitutional monarchy with a king and queen. King Abdullah II became king in 1999 following his father’s death.

Each day was jam-packed with multi-faceted experiences and excursions to famous and not-so-famous sites. One of our days looked like this: Started off at Roman ruins overlooking the Sea of Galilee, then visited the site where Jesus was baptized, dipped our toes in the Jordan River and finished the day floating in the Dead Sea covered in mud. And this was pretty typical, if you could call it that!

Here are some highlight photos to keep you coming back for more! 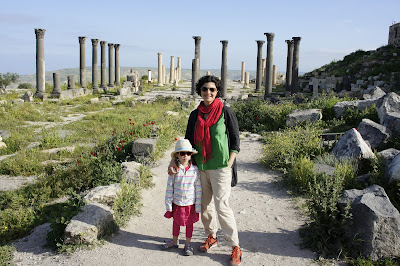 Sofia and me strolling old Roman streets in Umm Quays.


Overall, there are many, many things I miss about Jordan, but I would be remiss if I didn’t mention a few things that I won’t miss just to give you the full picture:

1. Lack of toilets… when traveling with two 4-year-olds this is a major pain.

2. Carrying toilet paper everywhere… similar to the first point. When we did finally find a toilet, there was rarely toilet paper, so we carried it everywhere.

3. Endless stares … the men aren’t used to seeing women “uncovered” and they don’t hide their interest in Western women at all.

4. Garbage … sadly, there is garbage everywhere in Jordan even in the nicer areas. We designated their black plastic grocery bags the national bird of Jordan because we saw them everywhere, even flying high in the sky.

5. Food safety… worrying about what food (especially fresh fruits and vegetables) were safe to eat because of the bacteria in the water. We took the proper precautions and thankfully no one in our group got sick.

6. Crazy drivers… lanes don’t even seem to provide any guidance to drivers in Jordan. And stoplights seem to be optional.

7. Border crossings and security check points. They were pretty painless for us, just long, and they were constant reminders of the unrest in the region.


8. Brushing my teeth with bottled water!

9. And last but not least - cigarette smoke!

Even with all of this, the positives FAR outweighed the negatives. I have a renewed sense of confidence, perspective, humanity and happiness after going on this trip. Those are invaluable benefits of international travel for sure. After hearing about our trip, my Uncle Jim put it so well: "International travel is so important and allows us to much better understand points of view, beliefs and needs of other cultures, but in fact, we are all one."


I hope you enjoyed his overview. I will be back soon with more photos and tales. I promise future posts will be shorter! Thanks for reading.