What a Greek Weekend! 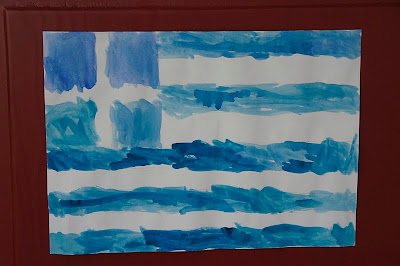 Well, I didn't make it to Greece as my friend Jeanne suggested in her post on Friday, but I did my get fill of Greek food, music and culture at the Seattle Greek Festival that is hosted by Saint Demetrios Greek Orthodox Church in our neighborhood every year. It's a fun excuse to eat, drink and be merry - all weekend! It's also a great excuse to don some blue and white. Sofia and I painted Greek flags this week in anticipation of the event, which we affectionately refer to simply as "Greek Fest."

I'm not Greek, although my maiden name (Hermes) is and I've been told I could pass as Greek with my dark hair and olive skin, I embrace my "Greek heritage" every year for this festive weekend. 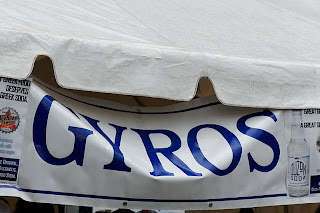 Gyros are always my festival favorite. Sorry I didn't get a picture of the real thing. I downed it before I thought to take a picture. It was that good!
﻿ 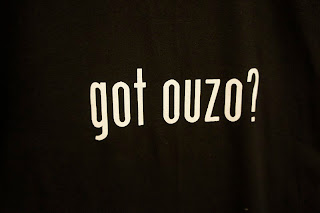 And a little Greek Ouzo goes a long way!

It's also a great excuse to have a party. We've been hosting our annual Greek Fest pre-func for as long as we've lived in our house - 13 years now. It's fun to welcome new and old friends into our home and share in some Greek culture together.  I think our friends look forward to it as much as we do now - some start asking about it in June. 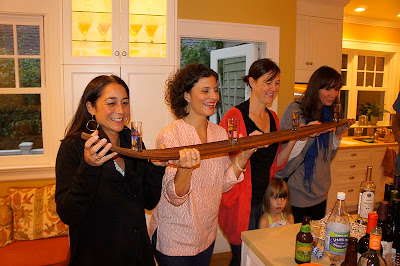 Although hardly a Greek tradition, the "shot-ski" always comes out at our party. In unison, the participants chant "I ski, you ski, we all ski for shot-ski" before taking a shot of licorice-flavored Ouzo from shot glasses that are attached to a ski.  It seems like something you'd see in Scandinavia rather than Greece! No matter, it's a fun crowd pleaser. My lovely girlfriends (from left: Alisa, Megan and Megan) enjoyed a shot-ski with me! 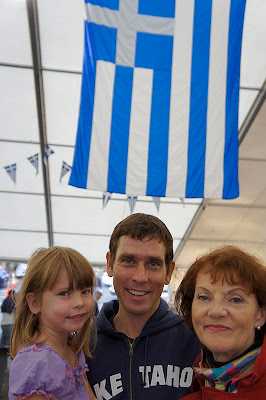 We had dinner at the festival tonight to help celebrate my mom's birthday. Five years ago we announced to her over gyros that I was pregnant with Sofia. Greek Fest has become a special tradition for us. I'm not sure what it is about the Greeks, but they know how to put on a good party.