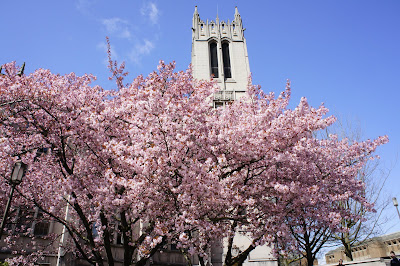 Cherry blossoms bloom once a year in Seattle and I always anxiously anticipate their arrival as they signify that spring is (almost) here. The blossoms only last a week or two, so earlier this week I hustled over to the University of Washington campus (about a mile from my house and my alma mater) to take in the glorious blossoms and capture a few pictures to share with those of you who missed them this year. It was a beautiful sunny day and the quad was packed with students studying and tourists snapping pictures – it took me right back to my undergrad days. 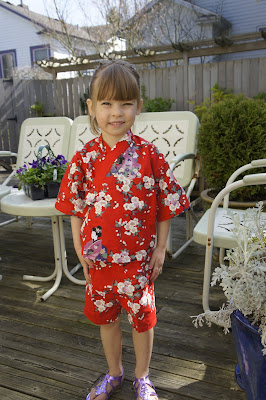 On that same day, we visited our next door neighbors to show them this outfit that a friend from Japan sent to Sofia when she was a baby. According to our neighbor, Hiroshi, who grew up in Tokyo, it is called a Jinbei and is historically worn by men (like his father) but lately ladies wear them too. Sofia recently discovered it hanging in her closet (where it’s been since her birth) and she loves wearing it. I didn’t realize that the flowers on it are cherry blossoms, pretty timely with the trees in bloom right now. Hiroshi’s wife pointed this detail out and told us about the Japanese tradition of having cherry blossom parties under the trees. She said they eat lunch and treats under the trees. According to Wikipedia, they also drink sake in cheerful feasts. Sounds good to me. 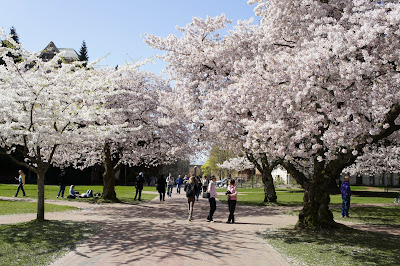 The Japanese tradition of cherry blossom viewing parties are known as hanami. They gather in large numbers wherever the flowering trees are found. Thousands of people fill the parks to hold feasts under the flowering trees, and sometimes these parties go on until late at night. The Japanese people continue the tradition of hanami by taking part in the processional walks through the parks. This is a form of retreat for contemplating and renewing their spirits. 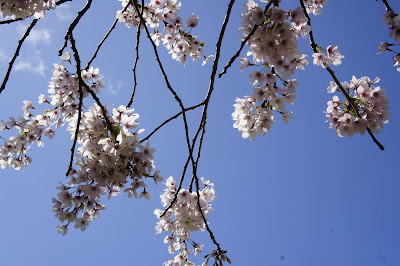 I wish I knew about cherry blossom parties earlier as we are heading out of town this weekend and the trees will likely be bare when we get back. But there is always, next year, right? If you’re in Seattle this weekend, gather some friends, bundle up, pack a lunch and some sake and head over to the UW campus for your own cherry blossom party.